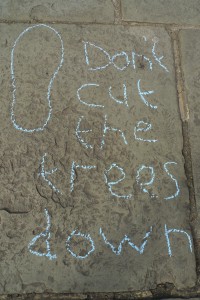 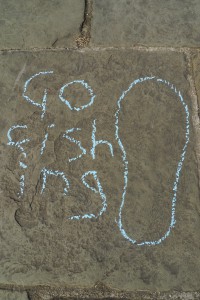 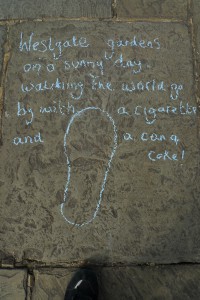 I have a foot made of plywood.

It’s not a model of a foot, it’s more the shape of a footprint. It’s big too, probably about (UK) size 18 or maybe even bigger.

I draw around it with chalk on pavements and paths where people walk but cars won’t run me over and I ask people to write words or thoughts or messages on, in or around their very own footprint. This continues a tradition in walking arts practice and academic writing about walking that characterises the pedestrian act as the writing of a story or history. Think about it: every time you walk somewhere things happen and, in a way, a story is created with you at the centre of it. 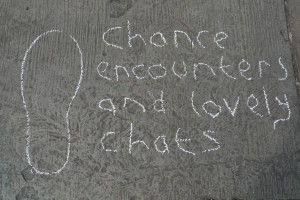 I physically wrote all bar two of the messages but only one of them was my own thought.  All the rest came from other people’s minds; I just wrote it out for them because they were too busy.

Anyway, I was in Abbots Mill Garden waiting to see if anyone would ask what I was doing or show any interest but interest was thin on the ground so I started engaging people directly by asking: “Have you got a playful message for the city?”

A girl walking her dog didn’t know what to write so I mentioned the man and the fish I met yesterday. She said “what the big one?” “Yes!” I said. The fish is famous! The man was not that big. I was glad I stayed. N.b. If you don’t know about the famous fish, have a look at my previous post 🙂 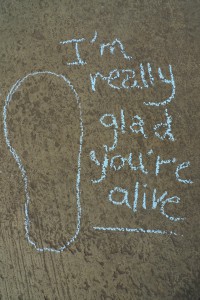 Three small children (of about seven years old) did stop and read everything though. They were amazed: “His feet are massive!” they said of the footprint outline. I said that “they are the feet of the city.” I meant it to be ironic but it sounded pretentious and was probably too metaphorical for seven year olds… but I do like the idea of a giant walking the streets and leaving playful thoughts with each step.

A young father in Wincheap, which is an area of Canterbury, gave me the idea for the footrpint. I was chalking some letters on a tarmac footpath so that people’s feet spelled out words as they stepped on the letters. He said “you should have a step and then do a letter in each step.” I didn’t know what he meant at first but then I twigged. It was, and is, a great idea, so now I carry this big plywood foot around with me and it gets chalk dust all in my backpack. 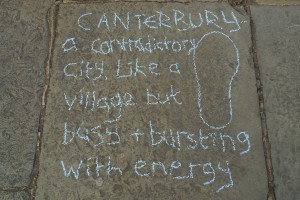